received via eMail from Brad for his Allstars v Aardvarks


good luck to all

A few positional changes, trying young James Roberts at fullback while Ennis moves to the bench with Taumalolo who gets his first start for the year along with Waqa Blake. New signing Moses Mbye slots straight into 5/8 (yes, because everyone else is injured) 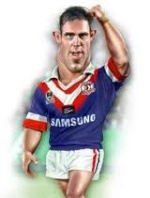 Its been an interesting week for the Bluetongues. We were hoping to have young Tom Trbojevic line up alongside his brother Jake, but this weeks opposition the Stopouts offered far more than we could afford. It took a marathon bidding war, but the Bluetongues just could not fit him in the salary cap.

Jake was too devastated and has decided not to play against his brother so the Bluetongues remain unchanged from last week.

2nd vs 3rd and a chance for both sides to measure how they're going this season. Both sides have similar attacking points, where the Aardvarks have been a little more consistant on the points each week against the Allstars who can score big and have posted 50 twice this season - so hopefully our defence will keep them under control.

We lose Dean Whare to injury this week giving Edrick Lee a starting spot and pushing Tyrone Peachey into the reserve back role. This in turn allows (hopefully) our new recruit Tim Browne to get a start... [If contract not approved, Danny Wicks as 18th man will move onto the bench]

Aardvarks for the weekend are -;